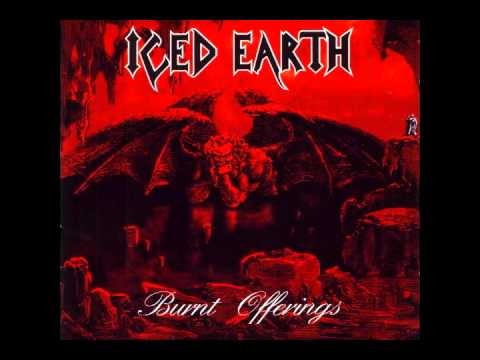 I noticed that there wasn’t the complete version of this song. I found cutted out ones, splitted ones or just covers.
Here is the complete first studio version of Dante’s Inferno performed by Iced Earth.
This version is the 8th track of the album Burnt Offerings but you can find another studio version into the Days Of Purgatory album.

Descention, thrusting to the second plain
Minos judges as his tail twines
Lustful thoughts and greed whip these wretched souls
A hurricane of hate mocks their helpless pleas

Drifting now down deeper, into eternal flames
Awake at the third circle, the cold and filthy rain
Punished for their gluttony, languid for all time
The earth it stinks of corpses, damned for all time
The vicious beast Cerebus, three heads, blooded eyes
Tears his talons through the air, all the sinners cry

Down, be still thy cursed wolf
The master scorns its name
Dive to the next plain
The sullen and the vain
Suffer for greed
The prodigal they bleed
For all eternity
Plutus holds the key

Damned, the wrathful and the vain
Suffer the fifth plain
Cross the river Styx
Heed your crucifix
The mudded corpses cry
Howling to the sky
Reach the other side
Open wide the gate

Enter the sixth circle of barren land and flames
Passing through the gate of Dis the furies scream her name
Belching forth in agony invoking her to rise
The spirit’s rage consuming us the evil in their cries
Queen of vipers, queen of serpents
Cast their souls to stone
Spread to wealth of Gorgon’s power
Medusa’s inner soul

We’re drawing ever closer to the seventh hell
They violate their neighbors, their god and themselves
We’re sailing slowly through the boiling river of blood
Immersed in the depths below souls scream in agony
The twisted beast he laughs, he draws his arrow back
His sights on anyone exposing of their flesh
He impales their hearts with ease
And shrugs their piercing screams
Pity is they’ll never die
They’ll suffer here eternally