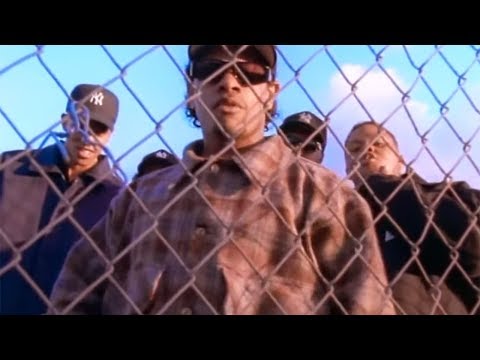 Hey yo, Doctor, here’s another proper track
And it’s phat, watch the sniper, time to pay the piper
And let that real s*** provoke
See, you’s a wannabe ‚loc, and you’ll get smoked, and I hope
That your fans understand when you talk about sprayin‘ me
The same records that you makin‘ is payin‘ me

M*therf**k Dre! M*therf**k Snoop! M*therf**k Death Row!
Yo, and here comes my left blow
‚Cause I’m the E-A-Z-Y-E and this is the season
To let the real M*therf**kin‘ G’s in
You’re like a kid, you found a pup, and now you’re dapper
But tell me, where the f*** you found an anorexic rapper?
Talkin‘ ‚bout who you gon‘ squabble with and who you shoot
You’re only sixty pounds when you’re wet and wearin‘ boots
(Damn, E, they tried to fade you on Dre Day)
But Dre Day only meant Eazy’s payday
All of a sudden Dr. Dre is the G Thang
But on his old album cover he was a she-thang
So, n***a please, n***a please
Don’t step to these M*therf**kin‘ real G’s

Stop him in his tracks, show him that I am Ruthless
Yo, Dre! (What’s up?)
Boy, you should’ve known by now

Every day it’s a new rapper claimin‘ to be dapper than the Dresta
Softer than a b***h but portray the role of gangsta
Ain’t broke a law in your life
Yet every time you rap you yap about the guns and knife
Just take a good look at the n***a and you’ll capture
The fact that the b**tard is simply just an actor
Who mastered the bang and the slang and the mental
Of n****s in Compton, Watts, and South Central
Never ever once have you ran with the turf
But yet in every verse claim you used to do the dirt
But tell me, who’s a witness to your f**kin‘ work?
So you never had no bid’ness, so save the drama, j**k!
N****s straight kill me, knowin‘ that they pranksters
This is goin‘ out to you studio gangstas
See, I did dirt, put in work, and many n****s can vouch that
So since I got stripes, I got the right to rap about that
But n****s like you, I gotta hate ya
‚Cause I’m just tired of suburbia n****s
Talkin‘ about they come from projects
Knowin‘ you ain’t seen the parts of the streets, G
Think you started tryna bang around the time of the peace treaty
Wearin‘ khakis and mob while you rhyme
Little f** tried to sag, but you’re floodin‘ at the same time
And your set don’t accept ya; scared to kick it with your homies
‚Cause you know they don’t respect ya
So, n***a please, check nuts
Before you step to these muthaphuckkin‘ real G’s

Well, it’s the Knocc Out, definition „Original baby gangsta“
Approach me like you hard, m*therf**ker, I’ma bank ya
Shank ya, with my f***in‘ shank, if I have to
Dr. Dre and Snoop Doggy Dogg are f***in‘ actors
Pranksters, studio gangstas, busters
But this time you’re dealin‘ with some real m*therf**kers
G’s, n***a please, don’t try to step
‚Cause if you do, then a pealed cap is all that would be left
See, young n***as like me will break you off somethin‘
Claimin‘ my city — but Dre, you ain’t from Compton
N***as like y’all is what I call wannabes
And ain’t s**t compared to real muthaphuckkin‘ G’s

Stop him in his tracks, show him that I am Ruthless
Yo, Dre! (What’s up?)
Boy, you should’ve known by now

I never met a O.G. who never did s**t wrong
You tried to diss the Eazy-E, so now, n***a, it’s on
You and your Doggy Dogg think that y’all hoggin‘ s**t
Both of you b***hes can come and suck my Doggy d**k
Beatin‘ up a b***h don’t make you s**t, but then again
Some n***as think it makes a man
Damn, it’s a trip how a n***a could switch so quick
From wearin‘ lipstick to smokin‘ on chronic at picnics
And now you think you’re bigger
But to me you ain’t nothin‘ but a b***h-*ss n***a
That ain’t worth a food stamp
And at Death Row, I hear you gettin‘ treated like boot camp
Gotta follow your sergeant’s directions
Or get your *ss pumped with the Smith & Wesson
Learn a lesson from the Eaze
Stay in your place and don’t step to real muthaphuckkin‘ G’s